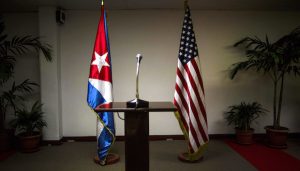 A Cuban flag and an American flag stand in the press room during the second day of talks between U.S. and Cuban officials, in Havana, Cuba, Thursday, Jan. 22, 2015. The United States and Cuba are trying to eliminate obstacles to normalized ties as the highest-level U.S. delegation to the communist island in more than three decades holds a second day of talks with Cuban officials. (AP Photo/Ramon Espinosa)